That was a great seminar with great people, why do I say that it was great? because when I teach and feel that I can go through the small details of Sensei Nishiyama's teachings, and people are attentive and interested, people are absorbed and absorbing the details, than it is a great sign, than we are really learning and not just working out.
When the details and principles are digested, the flashy stuff is easy, and when we push and work hard training is effective, but if the focus is on the flashy, than we are limited to the external and to athletic ability and we are likely to develop bad habits as well.
Thank you guys for such great effort and feedback. 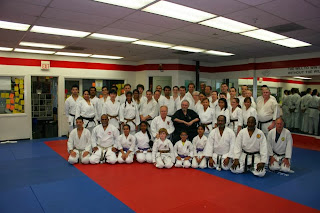 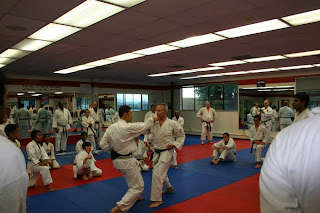 Austria seminar took place last weekend, November 8-10, this is the 19th year that I am teaching in Austria.
By now, the town of Vienna Neustadt feels like coming home, same cozy hotel and the same person who receives me each year, there is a barber shop by the hotel, where I go to get a haircut every year.

And most important dedicated karate people that keep searching and improving their karate day by day, it is not their profession but it is their passion.

We had participants from Germany, Czech Republic, Russia and of course Austria.
We spend significant time practicing details of Kanku Dai as Sensei Nishiyama was teaching it, it was my kata as a brown belt and i used to practice Kanku Dai at least 2 hours a day.
I used Kanku Dai to explain body dynamics, body snap, pressure to floor at kime, and how to make proper contraction at kime and many other fundamentals.
Than we explained footwork of Oji Waza (response timing) and Shikake Waza (set up timing), with focus  on Sasoi (invite), Koroshi Waza (cut, kill opponent potential action) and combinations.

I had a lot of fun sharing karate and good time with my friends.
Posted by Avi Rokah at 9:27 PM No comments:

Sensei Nishiyama the practical and the philosopher

Next week, on November 8, it will be 5 years to the passing of my teacher, Sensei Nishiyama. He was like a second father to me since we spent most of our days together.
Sensei Nishiyama was very pragmatic and a philosopher at same time.
His greatness was that he merged the old wisdom of Okinawa karate, with the old traditions of Japanese Budo (martial arts) and with latest sport science.
In his teaching he was very methodical and scientific, and every detail had a reason and had to work and be part of the whole picture.
His karate was no nonsense, everything was for application, and every detail meant for more efficiency.
Over the years he created a clear system that meant to bring the full mental and physical potential of the karateka.

When I first came to LA at 1981, I expected hard training, but I also expected karate to be spiritual, and I remember that after my first class, it was the Friday noon class, Sensei told me "put white belt on, step by step, understand?" Only that I did not understand any of that. Sensei "understand" sounded to me like "Zen" and I was walking around all day wondering what words of wisdom did I miss.
Later I realized, that the philosophy that Sensei was taught was in the action, in doing, not in words.
As realistic as he was, he understood that just because we cannot see or prove something it does not mean it is not true, and as much as science proves many karate concepts, there are concepts that we know to be true from experience, and science cannot yet prove. He taught concepts that were intangible such as "don't use eyes", "think by heart, act by ki", "condense ki energy to body center and than give ki energy from center through contact area".
Sensei Nishiyama did not spend a lot of time talking philosophy, for him it was through action that one applies philosophy, he summed his philosophy in few words such as "keep trying", "only dead no come to training", "always do your best", "target is self", "best fight is no fight".
If someone talked and didn't do, Sensei would call it "kuchi Waza" (mouth technique), or he would tell me: "when the body does not move, dreams move".
He cared about how you bow, because doing it right meant dignity and thanking your partner for being your teacher, being humble, doing it sloppy meant every thing you do follows the manners and will be sloppy.
One night he made bow for 15 minutes till he was satisfied.
He cared that you always respect your opponent in kumite, and never be sloppy "Karate is fighting with dignity, like a samurai, not like Yakuza".
He appeared rigid at times, but in a long run he was usually correct, and had reasons, for example one day he came to my dojo, and in the kids class one of the students dropped the belt on the floor. Sensei Nishiyama was upset at that and kept reminding me of the incident for few months, at first I did not understand why he was so stubborn about that belt, but later I understood the importance of that.
It is the small details and the way you manage yourself outside of class that will influence how precise and attentive to details you will be in training.
Sometimes after 5 hours training I was exhausted and slouched and he used to sneak behind me in the hallway and hit my back really hard explaining that I must keep good posture all the time, he said training is only few hours a day, but rest of life is much longer and therefore have much more influence on developing good or bad habits.
When I was sparring it was not the results that mattered to him, sometimes when I felt that I was doing good, he was not pleased at all "don't do it the convenient way, do it the right way", and that was one of the great lessons in my life, don't look at the results, but rather did you use the right means to achieve the desired result.
It is easy to fall into habits, especially when you are advanced and things work for you the way you do them over a long time, but don't be satisfied with that, keep reflecting on yourself and do not lose the fundamental principles to achieve temperory results.
It is better to lose in the short term and develop in the right direction than to win and create bad habits along the way.
I hear his voice every day in my training, and I actually miss the strictness and the shinai chasing me.
Sensei Nishiyama taught me much more than how to fight and be a technician, but he gave me guidelines of how to live my life according to karate principles.
Posted by Avi Rokah at 6:09 AM 1 comment: