STILL MIND, TO PERCIEVE THE OPPONENT 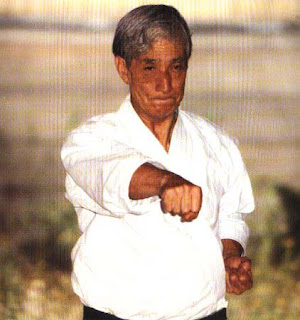 This is true in the physical and mental realms, we cannot separate the mental from the physical but here I will focus on the mental side.
The mind has to be still, still does not imply dead or stuck, it is not a forced stillness either, which comes from discipline and will power, if I force the mind to be here and not to be there, there is a conflict, energy is wasted. So we want to just observe, without thought, judgment, it means not being taken by any particular idea, action of the opponent, emotion, and the mind is free to be anywhere it needs to be. To be still is to observe, to monitor, without any effort, without interference of thought, it is to have a fresh mind, to look at the opponent without previous knowledge, than you become the opponent, see the opponent as is. We use the breath as a mean to become the opponent, “by passing” the brain as my teacher, sensei Nishiyama used to say, you look at the opponent directly without the screen, interference, noise of your thought and judgment, than how can the opponent surprise you? Whatever he does, you are already ahead. Thought is time, it is movement, and we want direct perception, or perception - action, rather than perception- thought – action. In this stillness, there is space, since the mind is not over informed, the mind is free and flowing and can be wherever it needs to be instantly, without a gap of thought, decision. In karate and budo the mind should be nowhere in particular but everywhere it needs to be.
My teacher used to say “don’t look to the opponent’s outside, look to his heart”, or he constantly said: “eyes way back, monitoring, having a total view”Zen master Takuan in his letters to famous samurai, Miyamoto Musashi said that the mind should be immovable, meaning not taken by any particular thing, so it can be anywhere it needs without space of time, as there is no gap between the stones hitting each other and the fire.We are looking for attentive mind rather than concentration, in concentration, one focuses on one thing excluding others, and there is effort, energy spent on concentrating, in attention one see the whole, effortlessly so all the energy is there to do what is necessary.
That is very important because it allows us for total action, as my teacher repeatedly used to say: “ho Shin, give everything, once you go you must give everything, there is no mind in the technique”.
In Budo we say “no mind” or “empty mind” which should be explained carefully, because it does not imply being stupid but rather “mind of no mind” when the mind is empty, there is no conflict or choices, the mind is free and can be applied fully, and so the body can follow, and can be applied without holding back.
In concentration thought is involved and the body becomes easily rigid, in attention there is no thought and the body is soft, yet it is more intense state, you see the situation with your whole being, the whole body sees the opponent, as sensei Nishiyama used to say: “put your eyes in your stomach”.The eyes is only part of how we pervieve things, and our thinking is only part of our intelligence, we have to know when thought is proper and when it is interfering.
In karate we learn to have an attentive mind through simple physical directions that are mental as well:
Eyes back
Low stomach forward and perceive the opponent
Breath reactionBreathing initiating muscle action and technique from the ground up
Feet like tap dance with the opponent
Breath tuning to opponent and ultimately conducting the opponent’s rhythm.
Posted by Avi Rokah at 9:20 PM No comments: