SUMMERY OF SEMINAR AND MATERIAL COVERED

I always try in my seminars to give a whole picture of how karate principles interlink, seeing the reasoning and wisdom in our system, rather than do a bunch of techniques and applications. 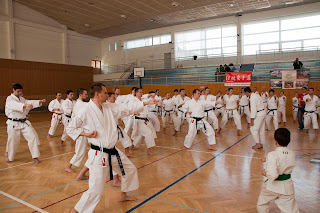 This way I believe people can take with them knowledge for future training.

We described what is a good posture and how a good or bad posture affects the technique and the Psyche.

I also try to give tools and drills to make good posture tangible and get feedback as to having a good posture or not because what we feel is right is not always accurate.

2 types of stance, kamae stance and kime stance, principles of functional stance, and understanding that every action is reaction from floor, even one finger move, it is from the feet, breath activates the feet.
And again, giving tools to get feedback if one is really using the floor in each techniques.

Power from center by body dynamics and muscles action.

Hiding the inhalation in order to expose chance.

Initiate technique quickest without back motion.

Kime – pressure to floor for acceleration and mean of transfer momentum to target.

Stressing that the more we give everything in the technique the more physical and mental preparedness we have, and Zanshin is effortless.

Amashi Waza - using space to avoid attack and counter in the off rhythm.

Tsume – press the opponent, infinitely and smoothly coming into his space forcing him to attack, and anticipating him.

Give bait - when detecting the opponent waits for counter, give the opponent a technique to block, and use the space between his block to counter, switching techniques sharply.

Combinations – when the opponent retreat and we can initiate in between his rhythm with small techniques to close the space while staying mentally/physically ahead, finishing with big technique.