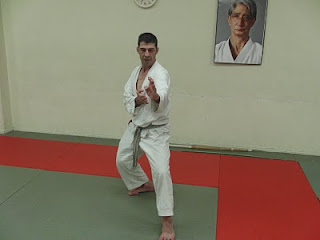 Hitting block is the most common in our karate, first to be taught to beginners, and is the main subject of this article. 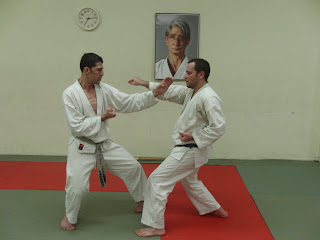 Here I will describe the most important technical points that make uke waza effective and useful in free application and against unknown attack, and not only in basic training.

I will also explain the necessary mental preparation that is necessary to apply hitting block successfully no matter what attack comes at you and at what speed.

To go a little further on this point, my hands are mentally touching opponent’s hand, on the way to the attack. Physically not touching but mentally touching.
This mental preparation, “give direction to technique”, is critical for success of uke waza for 2 reasons:

1. When danger we reflexively lift the hands to protect the brain and throat, and this is a back motion, which is not acceptable in application.
We cannot change this reflex but we can redirect it with our intention, and the reaction will be to direction of opponent

2. When something happens we cannot analyze, decide and than move, that is too late, when the muscles already have direction, the breath is the trigger, “bypassing the brain”, and allow us to move as the opponent initiates action, without a gap.

Keep in mind block is not defense, think that when late for Sen, you attack opponent's technique on the way to attack his body. Uke Waza is a technique of Go no Sen.

Don’t use eyes, since if we look we will have to confirm and than move and that is too late. If we look we will be over informed since the opponent has many options and than we are likely to doubt and hesitate, you should observe but not look.

2. Within the block we must take leadership

And be ahead of the rhythm, be able to break the opponent rhythm and counter between his rhythm and not in the same rhythm. This means that we hit the opponent’s attack before kime, when he still has some momentum left, and this left momentum is our space for counterattack.
If we cannot hit the attack before kime we must switch to Amashi Waza, use space by shifting back, and when to apply Uke Waza or Amashi waza is not a conscious choice, it is not in the brain, it is result of experience and facing certain situations many times.

Also moving the foot first allows us to keep the head back while advancing which is safer, and enable us to monitor.
Using back stance is effective because it allows us to move the foot to adjust the distance without shifting the weight, we cannot do this in front stance.
Look at how many examples the kata gives us of using back stance with uke waza and in most cases moving forward, since uke waza should be used moving in, if we move back we use space to avoid the attack, and block is not needed.
When we switch from block to counter, we need to fully use the weight into the attack, since this is todome waza, so we change from back stance to front stance.

4. Arm move in straight line rather than circle.
This is important, the blocking hand move in shortest line to attack the opponent’s attack, we describe this motion as a straight line with a slight curve at end, since we need to create force in a sideline.
The reasons for that are two, first, a straight line is faster than a circle, and so if we block in circle we are in disadvantage.
Second, we avoid selection reaction, brain interference, when being attacked first my breath reacts and the arm extends straight to opponent, and as I move I choose left or right, jodan or chudan, this choice is not in my brain, it is in my back memo, drawn from my experience (like a computer back memo).
Few important details regarding this point are, first the block is as big as possible without over extending and loss of unity, connection between body center and arm, and that is because I want to catch the opponent as early as possible, before he accumulate energy, and in his territory.
Second the elbow moves as little as possible, to keep connection between body to elbow, to avoid exposing our body center, and also the moment the elbow moves unnecessarily, we are starting to move the arm in isolation, which mean the brain has to order the movement of the arm, and there is no more breath reaction and reaction from spine, and we are likely to be late.

5. Use wrist or near wrist area as contact area and attack opponent fist wrist area.
In the area near the wrist we can produce most power because we have most leverage, it is like the “sweet spot” in a baseball bat. It also allows us to “tsukome”, catch the opponent hand after block if necessary, especially if he has weapon, or if we want to throw him.
Attack the opponent fist, wrist area, also gives us most leverage at contact and it is faster to get to the fist than to forearm or upper arm.

7. In the block use sharp Muchimi (total body snap)

This is important since many times we have very short action space for block and need to accelerate sharply to produce force in short space.
Also sharp snap action allows us to switch quick from block to counter, using the potential energy that is in the snapping muscles.